Marines of Montford Point, The 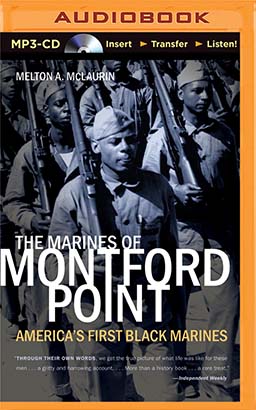 Marines of Montford Point, The

By: Melton A. McLaurin

This audiobook, in conjunction with the documentary film of the same name, tells the story of these pioneering African American Marines. Drawing from interviews with 60 veterans, Melton McLaurin relates in the Marines’ own words their reasons for enlisting; their arrival at Montford Point and the training they received there; their lives in a segregated military and in the Jim Crow South; their experiences of combat and service in World War II, Korea, and Vietnam; and their legacy. This audiobook serves to recognize and to honor the men who desegregated the Marine Corps and loyally served their country in three major wars.

“A valuable contribution to our understanding of the black military experience in World War II.” —North Carolina Historical Review

“Anyone interested in any aspect of the civil rights struggle or the history of race relations in the US must read this book.” —Choice

“An important collection.…Opens our eyes to a new range of histories to be explored.” —Journal of Southern History

“McLaurin adds invaluably to the literature on blacks in the military.” —Booklist

“This wonderful collection of personal narratives captures not only the struggle but also the triumph of the Montford Point Marines’ quest to become part of our nation’s most elite fighting force, despite overwhelming odds. Their voices will be heard through this book, telling their poignant testimonies. I am truly honored to walk in their footsteps.” —Colonel Adele Hodges, USMC