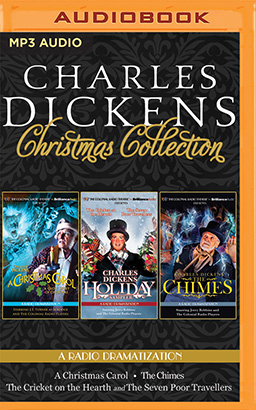 A Radio Dramatization Including A Christmas Carol, A Holiday Sampler, and The Chimes

The Colonial Radio Theatre pulls out all the stops in this magnificent production of the Charles Dickens classic Christmas story! This full cast dramatization features a powerful music score—from the magnificent, booming opening of "God Rest Ye Merry Gentlemen," to the frightening tones of the Ghost of Christmas Future. This Colonial Radio Theatre production has been broadcast yearly since 2005 on Sirius/XM Radio. A holiday treat both you and your family will enjoy for years to come.

"The Cricket on The Hearth" was first published in 1845.

A cricket constantly chirps on the hearth and acts as a guardian angel to the Peerybingle family. The arrival of a mysterious stranger threatens to shatter this harmony. Does the cricket have supernatural powers? Does he restore faith and overcome suspicion? A masterful story of love and loyalty, The Cricket on The Hearth is effused with the spirit of the season.

"The Seven Poor Travellers" was first published in 1854.

On Christmas Eve, a traveling gentleman happens upon a house in a quaint little village, which houses up to six travelers each evening. He decides to treat them all to a Christmas dinner and tells them a story around the fireplace about a soldier who finds the true meaning of forgiveness and redemption.

A sparkling holiday gem from the great Charles Dickens.