Shooting from the Lip 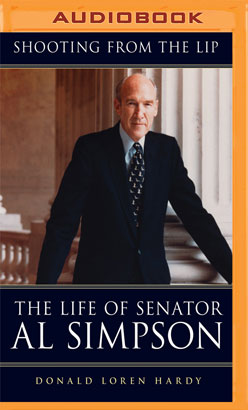 Shooting from the Lip

The Life of Senator Al Simpson

Shortly before Wyoming’s Alan K. Simpson was elected majority whip of the United States Senate, he decided to keep a journal. “I am going to make notes when I get home in the evening, as to what happened during each day. It will be entitled ‘The Odyssey of Big Al and His Travels through the Peaks and Valleys of Politics.’” Now the senator’s longtime chief of staff, Donald Loren Hardy, has drawn extensively on Simpson’s personal papers and nineteen-volume diary to write this unvarnished account of a storied life and political career.

Simpson gave Hardy full authorial control, telling him, “Don, just tell the truth, the whole truth, as you always have. Dig through the darkest recesses of my life. Leave teeth, hair, and eyeballs on the floor, if that results from telling the truth.” Taking Simpson at his word, Hardy shows listeners a thrill-seeking teenager in Cody and a tireless politician who has thoroughly enjoyed his work. Full of entertaining tales and moments of historical significance, Shooting from the Lip offers a privileged and revealing backstage view of late-twentieth-century American politics.

Hardy’s richly anecdotal account reveals the roles Simpson played during such critical events as the Iran-Contra scandal and Clarence Thomas’s confirmation hearings. It divulges the senator’s candid views of Mikhail Gorbachev, Saddam Hussein, six American presidents, and scores of other world and national luminaries. Simpson is a politician unfettered by partisanship. Among President George H. W. Bush’s closest compatriots, he was also a close friend and admirer of Senator Ted Kennedy and was never afraid to publicly challenge the positions or tactics of fellow lawmakers, Democratic and Republican alike.

Simpson’s ability to use truth and humor as both “sword and shield,” combined with his years of experience and issue mastery, has led to an impressive post-Senate career. In 2010 he co-chaired President Barack Obama’s Commission on Fiscal Responsibility and Reform, which Simpson viewed as a vital opportunity to educate Americans about the realities of the federal debt. Shooting from the Lip portrays a statesman punching sacred cows, challenging the media, and grappling with some of the nation’s most difficult challenges.