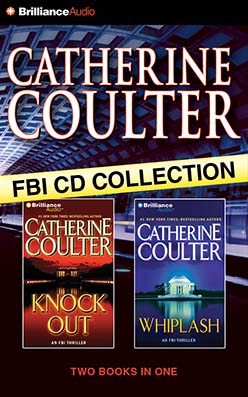 KnockOut
Seven-year-old Autumn Backman needed a hero. When she saw Special Agent Dillon Savich on TV, she knew she’d found him. She called Savich, but she didn’t use the phone.

They were burying dead people in my daddy’s grave...they’re coming after us. Please help me.

Ethan Merriweather, sheriff of Titusville, Virginia, realizes that Autumn has brought him a huge problem—a relentless madman who has the ability to control others simply by looking at them. It’s Uncle Blessed, and he wants Autumn.

When Savich answers Autumn’s call, she tells him Blessed is from Bricker’s Bowl, Georgia. Savich and Lacey Sherlock go to Blessed’s home where Savich realizes the only way to stop Blessed is to “cut off the snake’s head.”

Back in Titusville, Ethan, Autumn, and her mother are forced to hide from Blessed and his brother in the wilderness. Ethan knows the brothers will never give up their insane pursuit for Autumn.

It’s a race to stop the madness, or the madness will destroy them all.

Whiplash
Yale professor Dr. Edward Kender’s father is undergoing chemotherapy when the supply of a critical drug runs out. Unwilling to accept the drug manufacturer’s excuse of production line problems, Dr. Kender hires private investigator Erin Pulaski to prove that something sinister is going on at Schiffer Hartwin.

Meanwhile, in Maryland, FBI agents Lacey Sherlock and Dillon Savich are investigating an unusual case: Senator David Hoffman is experiencing a ghostly apparition with possible malicious intent. Sherlock and Savich are not sure what to believe, even after witnessing the disturbing specter for themselves. Then a call comes in from Connecticut: A top foreign Schiffer Hartwin employee has been found murdered behind the drug company’s U.S. headquarters.

Erin is certain the murder has something to do with her findings, but she risks exposing herself by coming forward. The pharmaceutical house has a secret of epic proportions—one it would do anything to keep hidden.