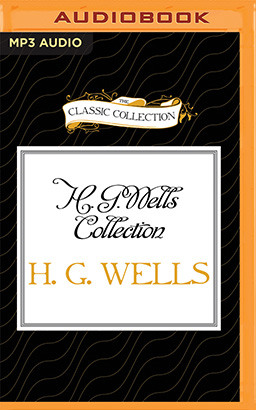 The Island of Dr. Moreau, The Country of the Blind, The Crystal Egg

"The Island of Dr. Moreau": While on a voyage in a small ship, Edward Prendick makes the mistake of sticking up for a deformed man that the sailors are tormenting. The result is that he is thrown off the ship when the man reaches his destination - an uncharted island. He is reluctantly rescued by the two scientists using the island for experiments. Prendick discovers that they are attempting to "humanize" various beasts and the hideous results of their experiments freely roam the island. Prendick's arrival upsets the delicate peace between them and the "animal-men" with catastrophic results.

"The Country of the Blind": In this famous fantasy story, a mountain climber falls into a strange and isolated society of non-seeing persons - claiming to have been in existence for 15 generations and cut off from the rest of the world by an earthquake. The interloper decides quickly that "In the country of the blind, the one-eyed man is king." However, things turn out very differently than he had planned. The experience of being an "other" - a seeing man in a world of blind persons - is the major theme of this story.

"The Crystal Egg": In this short story, Mr. Cave, a shop owner, finds a strange crystal egg that serves as a window into a Martian landscape. The War of the Worlds was probably H. G. Wells' best-known work, but this brief tale indicates that he had more than a passing interest in Mars. The artifact that the title refers to would not seem too extraordinary today, but this brilliant prediction of robotic planetary exploration seemed fantastic in the early 20th century.