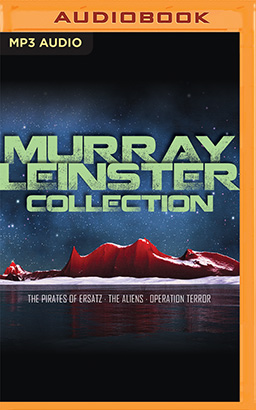 The Pirates of Ersatz, The Aliens, Operation Terror

The Pirates of Ersatz: In The Pirates of Ersatz, Murray Leinster presents a fast-paced, light-hearted adventure story with a touch of Monty Python and much derring-do. The hero, Bron Hodon, comes from a planet where there is only one vocation - space piracy. His dream is to become an electrical engineer so he makes his way to a planet with a "perfect society" and invents a power source that should benefit all. The perfect society does not appreciate it, accuses him of creating "death rays" and forces him to flee to Darth, a much more primitive planet. There, and in space, he undergoes a number of rollicking adventures that make him wonder if space piracy - with a twist - might not be so bad after all. This tongue-in-cheek space adventure has often been compared to The Stainless Steel Rat by Harry Harrison.

"The Aliens": Among other things, Murray Leinster is credited with the invention of "parallel universe" stories and in 1956 he won the prestigious Hugo Award for Best Novelette. Leinster wrote over 1,500 short stories in his career and two of the best, "First Contact" and "The Aliens," deal with humanity's first encounter with an alien race. In this story, the human race is expanding through the galaxy and so are the Aliens. When two expanding empires meet, war is inevitable. Or is it?

Operation Terror: Murray Leinster's science fiction stories typically dealt with themes of frustration with human frailty and its limitations, cynicism vs. idealistic ethics, and romance. When a mysterious alien spacecraft lands in a lake in Colorado and the invaders begin using a paralyzing ray that no one can understand or stop, it takes an ingenious man like Lockley to save the girl and solve the mystery of the aliens.