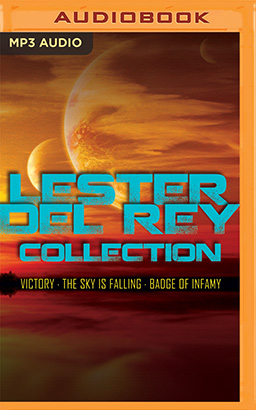 Victory, The Sky is Falling, Badge of Infamy

Victory: In Victory, one of the author’s best short novels, a victorious captain returns to his home planet after an alien war and finds that victory has a very steep price and that Earthmen seem to have suddenly all become cowards.

The Sky is Falling: This fascinating book is a combination of science fiction and fantasy. There are no “muggles” mentioned in the story, but like the Harry Potter books, The Sky is Falling takes place in a world where magic is used for everything. When spells are not enough to avoid a catastrophic event, a human is plucked from our world in the hope that his non-magical skills may save the day. A twist of fate, a shared name, and a tricky “revival” lead to startling consequences all around.

Badge of Infamy: Lester del Rey was a prolific American science-fiction author and editor. In Badge of Infamy, Earth is controlled by huge and powerful "lobbies." One of the biggest and most powerful is the Medical Lobby. Dr. Daniel Feldman dared to violate one of their rules in order to save a friend's life. As a result, he has become a pariah, shunned by all and forbidden to touch another patient on penalty of death. Doc Feldman escapes to Mars, where the Lobby is not quite as powerful. He is welcomed by the colonists, but, since he continues to break rules in order to save lives, he's hunted by the authorities. Then he discovers a Martian plague that could wipe out humanity on both planets, Feldman finds himself a pivotal figure when war breaks out between the two worlds. Earth threatens to wipe out the Mars colony completely unless a cure to the plague is found - and only Feldman has even a chance of finding it.