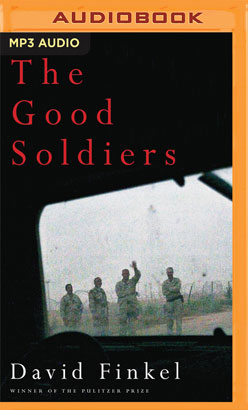 It was the last-chance moment of the war. In January 2007, President George W. Bush announced a new strategy for Iraq. It became known as “the surge.” “Many listening tonight will ask why this effort will succeed when previous operations to secure Baghdad did not. Well, here are the differences,” he told a skeptical nation. Among those listening were the young, optimistic army infantry soldiers of the 2-16, the battalion nicknamed the Rangers. About to head to a vicious area of Baghdad, they decided the difference would be them. Fifteen months later, the soldiers returned home — forever changed.

What is the true story of the surge? And was it really a success? Those are the questions that the Pulitzer Prize–winning Washington Post reporter David Finkel grapples with in his remarkable report from the front lines. He was with Battalion 2-16 in Baghdad almost every grueling step of the way. Combining the action of Mark Bowden’s Black Hawk Down with the literary brio of Tim O’Brien’s The Things They Carried, The Good Soldiers is an unforgettable work of reportage. And in telling the story of these good soldiers, the heroes and the ruined, Finkel has also produced an eternal tale — not just of the Iraq War, but of all wars, for all time.