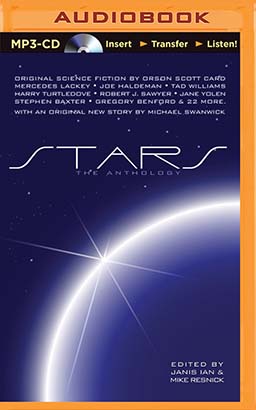 Original Stories Based on the Songs of Janis Ian

Featuring original short stories by 30 of Science Fiction's top writers, Stars is a huge anthology in both volume and talent. Each story, available only here, is based on a Janis Ian song and written expressly for Stars, creating a meld of jazz, prose, and science fiction found nowhere else—a treasure trove for fans of both SF and Janis Ian!

Stars was compiled and edited by Mike Resnick and Janis Ian and includes stories by Nebula winners and science fiction greats such as Joe Haldeman, Jane Yolen, Gregory Benford, Orson Scott Card, and more. Included, too, a story by Janis Ian.

The stories "have heart. They have life. They have truth. They move me," says Janis Ian. "As an artist I can ask for nothing more."

Janis Ian, an American songwriter, singer, musician, columnist, and science fiction author, began her career singing in the 1960s and 1970s. In 1975, she won a Grammy Award for her song "At Seventeen" and has continued to wow the world with her music ever since. Her books include science fiction, poetry, magazine articles and opinion columns, and her top-selling autobiography, Society's Child.