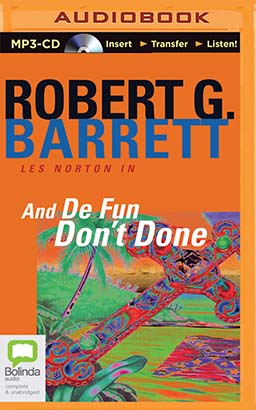 They don't call him Lucky Les for nothing. A ticket in a raffle and Norton was off to see to the US of A—Siestasota, Florida, where it turned out hot, red hot, and it wasn't just the weather.

Night club brawls, mafia hitmen, too many girls called Lori, gun crazed Americans, and the whole lot washed along in a sea of margaritas. Even for Les Norton it was just too hot to handle. So it was off to "greener" pastures—the Caribbean—for reggae, rum, and Rastafarians, not to mention Sultry Delta, sweet-lipped Esme, and Millwood Downie, schoolteacher, historian, and would-be stand-up comic, who helps Les trace his family tree and possibly uncover the biggest earn ever.

The world is finally Norton's oyster. All he has to do is get the shell open.