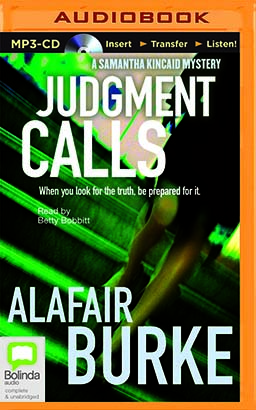 "Burke is a born storyteller and has created an attractive heroine whom I look forward to meeting again."
The Sunday Telegraph

An apparently simple assault case spirals into a complex web of violence and deception in this bold thriller from international bestselling author, Alafair Burke.

After three years on the job in Portland's Drug and Vice Division, Deputy DA Samantha Kincaid gets what she wants: her first case with the Major Crimes Team. Kendra Martin, a 13-year-old runaway, has been found drugged, viciously assaulted and left for dead in the Columbia River Gorge. Despite pressures to kick the case to assault, Samantha goes for attempted murder. Unfortunately the girl's story isn't gelling. Then again, neither is the alibi of the suspect she ID'd, a low-life who insists he's innocent. One thing is certain. Kendra knows the streets better than Vice – and Samantha's following her down every last one of them to crack the case.

But the road to the truth is more dangerous than Samantha dreamed, leading to an earlier death-penalty conviction, a teenage prostitution ring and threats to Samantha's own life. When the possibility of a serial killer enters the fray, it sends Samantha's trial into a tailspin and tests her judgment – in both her professional and personal life – to the very death.

"Burke blends courtroom drama and criminal investigation with surprising aplomb, and she uses her Northwest setting to good advantage . . . This promising debut augurs well for a successful series."
Booklist

"A bold, brash entry into the world of crime fiction, Judgment Calls is strong, smart and shocking. Alafair Burke has been on the front lines in the courtroom and on the streets, and brings her world alive in this exciting first novel. A powerful debut from a talented newcomer."
Linda Fairstein, author of Blood Oath and Killer Look

"Judgment Calls expertly shows that the most gripping drama is not found in the courtroom but in the places where choices get made in the shadows cast by politics and corruption and human desires. Burke comes out of the gate with a first novel that proves she's got what it takes and will be sticking around."
Michael Connelly, author