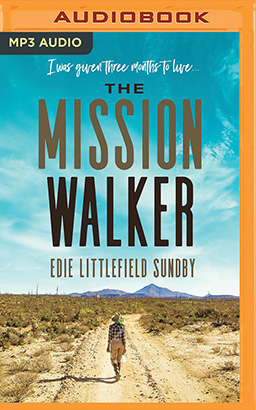 I was given three months to live...

This story is not about avoiding death, but living life.

Immerse yourself in the amazing story of 62-year old Edie Sundby, who, after being told she had 3 months to live, walked 800 miles instead through the California wilderness. Averaging 14 miles a day and stopping at life-giving missions along the way to revive her body and her soul. She followed that with another 800 mile walk through Northern Mexico to the California border. With fading strength and only one lung, she carried her mortality in every step and in the process opened up a profound communion with God and his creation.  In her first walk, she was duplicating the trail of Father Junipero Serra, a Franciscan missionary in the mid-1800’s who established nine missions between San Diego and San Francisco.  The second walk through Northern Mexico is one of the toughest in the western hemisphere and mirrors the path taken by Jesuit missionaries fleeing persecution. It is a story of triumph, of harrowing adventure, and of spiritual enlightenment.

And all of this with a terminal cancer that was chasing her every step of the way.  It still is, and she continues to walk with it every day.

For me, walking is a transcendent physical/emotional/spiritual experience, like dancing.  “If I can move, I am not sick.”That is my alternate reality. And I believe with all my will in that reality.  So when cancer strikes (or in the throes of battle) I believe that if I walk I will live; when I stop I die.

And I didn’t just survive. I have lived every second since. I have walked 1600 miles and braved the inhospitable Mexican desert. Because life is not meant to just be survived.

Life is the greatest adventure there is.  Why stop your adventuring when knowing the end is near?

This book will not only connect with readers through her bravery and authenticity but also through the adventure itself and the lives of spiritual trailblazers who forged the path many years ago.