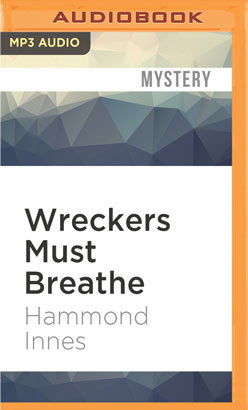 The spectre of another world war haunts journalist Walter Craig and disturbs the peace of his seaside holiday. But below the Cornish cliffs, hidden by churning seas, the enemy is very real indeed, and much closer than anyone could suspect. Craig and his singularly resourceful fisherman friend alone discover the terrible truth—a potentially devastating threat to Britain's merchant ships—and alone must risk their lives against the might of the German navy.

This is a classic wartime adventure from the master of suspenseful storytelling.

Ralph Hammond Innes was born in Horsham, Sussex, on 15 July 1913 and educated at Cranbrook School, Kent. He left school aged 18, and worked successively in publishing, teaching, and journalism. In 1936, in need of money in order to marry, he wrote a supernatural thriller, The Doppleganger, which was published in 1937 as part of a two-year, four book deal. In 1939 Innes moved to a different publisher, and began to write compulsively, continuing to publish throughout his service in the Royal Artillery during the Second World War.

Innes travelled widely to research his novels and always wrote from personal experience—his 1940s novels The Blue Ice and The White South were informed by time spent working on a whaling ship in the Antarctic, while The Lonely Skier came out of a post-war skiing course in the Dolomites. He was a keen and accomplished sailor, which passion inspired his 1956 best seller The Wreck of the Mary Deare.

The equally successful 1959 film adaptation of this novel enabled Innes to buy a large yacht, the Mary Deare, in which he sailed around the world for the next 15 years, accompanied by his wife and fellow author Dorothy Lang. Innes wrote over 30 novels, as well as several works of non-fiction and travel journalism. His thrilling stories of spies, counterfeiters, black markets, and shipwreck earned him both literary acclaim and an international following, and in 1978 he was awarded a CBE. Hammond Innes died at his home in Suffolk on 10th June 1998.