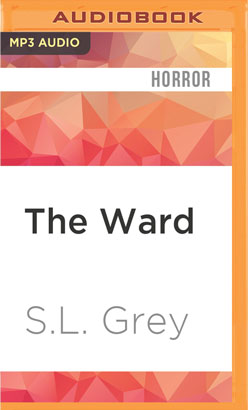 Lisa is a plastic surgery addict with severe self-esteem issues. The only hospital that will let her go under the knife is New Hope: a grimy, grey-walled facility dubbed "No Hope" by its patients.

Farrell is a celebrity photographer. His last memory is a fight with his fashion-model girlfriend and now he's woken up in No Hope, alone. Needle marks criss-cross his arms. A sinister nurse keeps tampering with his drip. And he's woken up blind. Panicked and disorientated, Farrell persuades Lisa to help him escape, but the hospital's dimly lit corridors only take them deeper underground—into a twisted mirror world staffed by dead-eyed nurses and doped-up orderlies. Down here, in the Modification Ward, Lisa can finally have the face she wants... but at a price that will haunt them both forever.

Sarah Lotz and Louis Greenberg met in a pub while bunking a crime seminar and, as one does at pubs, discovered a mutual interest in horror. Sarah, a crime novelist and screenwriter, was a die-hard zombie fanatic; Louis, a literary writer, editor and recovering bookseller, had studied vampire and apocalyptic fiction. Rejecting their initial plans for a vampire-vs-zombie faceoff, they decided to write the first mainstream South African horror novel together and S.L. Grey was born. Sarah also writes the Deadlands series of zombie novels for young adults with her daughter Savannah.