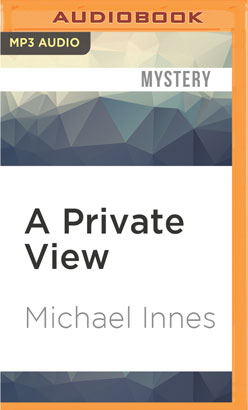 Sir John and Lady Appleby attend a memorial exhibition of the oils, gouaches, collages and trouvailles of artist Gavin Limbert, who was recently found shot, under very suspicious circumstances. As Assistant Commissioner of Police, Sir John is already interested, but he becomes even more intrigued when Limbert’s last masterpiece is stolen from the gallery under his very eyes.

In 1932 he married Margaret Hardwick, a doctor, and they subsequently had five children including Angus, also a novelist. The year 1936 saw Innes as Professor of English at the University of Adelaide, during which tenure he wrote his first mystery story, Death at the President's Lodging. With his second, Hamlet Revenge, Innes firmly established his reputation as a highly entertaining and cultivated writer. After the end of World War II, Innes returned to the UK and spent two years at Queen's University, Belfast where in 1949 he wrote the Journeying Boy, a novel notable for the richly comedic use of an Irish setting. He then settled down as a Reader in English Literature at Christ Church, Oxford, from which he retired in 1973.

His most famous character is 'John Appleby', who inspired a penchant for donnish detective fiction that lasts to this day. Innes's other well-known character is 'Honeybath', the painter and rather reluctant detective, who first appeared in 1975 in The Mysterious Commission. The last novel, Appleby and the Ospreys, was published in 1986, some eight years before his death in 1994.