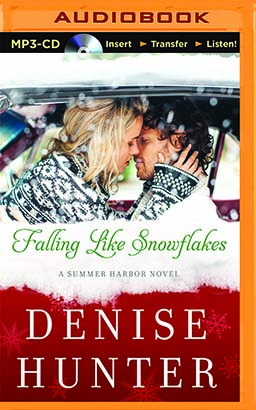 When the Christmas season finds Eden in Summer Harbor, Maine, she’s on the run from trouble. Romance is the last thing on her mind.

Riding in a bus in the thickly falling snow, Eden Davis wonders how it ever came to this—fleeing under cover of night with young Micah sleeping fitfully in the seat beside her. When a winter storm strands them in Summer Harbor, Maine, Eden wonders if what might have been the end could be a new beginning.

Beau Callahan is a habitual problem-solver. He’s recently left his job with the sheriff’s department to take over the family Christmas tree farm to save it from insolvency. But he’s flummoxed. During the busiest season of the year, he’s shorthanded. Then Eden shows up looking for work, and Beau believes he’s been rescued. Competent, smart, and beautiful, Eden’s also guarded and quiet. He soon figures out she comes with a boatload of secrets. But Beau can’t seem to help himself from falling for her.

As Christmas Eve approaches, Beau discovers he’ll do anything to keep Eden safe. But who’s going to protect his heart from a woman who can’t seem to trust again?