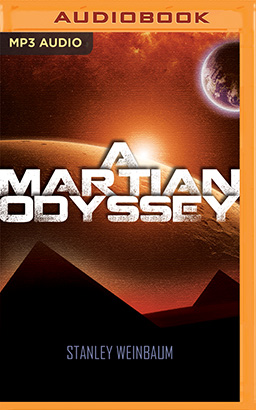 A Martian Odyssey first appeared in 1934. It was Weinbaum's first published story, and remains his best known. It's publication immediately established Weinbaum as a leading figure in the field. This tale remains a classic of the genre, and an inspiration for all subsequent writing in science fiction.

One of the aliens in the story, "Tweel," remains one of the most recognized aliens in early science fiction, and is said to be an inspiration for aliens in the works of Isaac Asimov and Arthur C. Clarke. "Tweel" even has his own entry in Wikipedia! Isaac Asimov described Tweel as being the first creation in science fiction to fulfill John W. Campbell's request for "a creature that thinks as well as a man, or better than a man, but not like a man." In 1970, when the Science Fiction Writers of America voted on the best science-fiction short stories of all time, A Martian Odyssey came in second to Asimov's Nightfall, and was the earliest story to make the list. The chosen stories were published in The Science Fiction Hall of Fame Volume One, 1929-1964.