Mind of Her Own, A 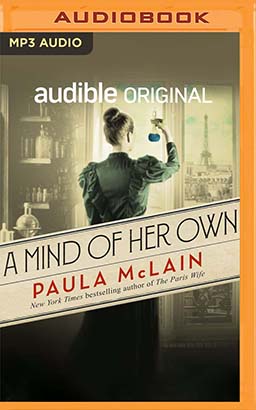 Mind of Her Own, A

From Paula McLain, the best-selling author of The Paris Wife and Love and Ruin, comes a breathtakingly intimate story of the brilliant, willful Marie Curie - a young woman in Paris on the verge of her greatest discovery yet: herself.

Paris, 1893. Twenty-five-year-old Marie Sklodowska is studying science at the Sorbonne - one of the only universities in the world that has begun to admit women. A thousand miles from her native Poland, with no money and the odds stacked against any woman daring to pursue a career in such a rigorous field, Marie throws herself into her studies. She's certain that to succeed in a man's world, she will have to go it alone.

Her meticulous plans get thrown slightly off-course when Marie attracts the attention of an accomplished young physicist, himself on the precipice of greatness. Thirty-five-year-old Pierre Curie, famous for his work on symmetry, believes he has found in Marie an equal who shares his devotion to scientific discovery. He offers to help with her work, and soon begins to court her. But to Marie, men have always been an obstacle, love a distraction from her goals. She hasn't come this far to let either stand in the way of her dreams - dreams Pierre insists they can share.

In A Mind of Her Own, McLain taps into the luminous mind and complex heart of a singular woman caught between order and chaos, science and love in the period just before the world would learn her name.