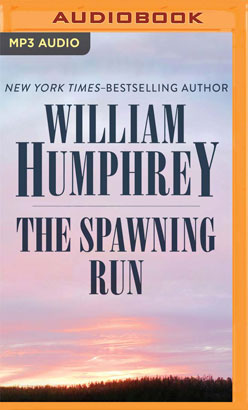 In order to mate in the same freshwater stream where it was spawned, the salmon swims 1,000 miles or more and overcomes countless obstacles, from trawling nets to 12-foot-high waterfalls. To catch the King of Fish at the end of its incredible journey, the Anglo-Saxon angler subjects his pride, his bank account, and his taste buds - poached milk, anyone? - to similar dangers. Nine out of 10 salmon do not make it back to the sea once their spawning run is finished; nine out of 10 sportsmen return to the hotel empty handed when the fishing day is done.

And yet, year after year, they return to the rivers and streams of Great Britain - fish and angler both. Why? Perhaps “poor Holloway”, who has yet to land a salmon after 20 spawning seasons but whose success rate with the bored wives of more skillful fisherman is scandalously impressive, knows the answer.

An elegant blend of fishing narrative, travelogue, and character study, The Spawning Run is a hilarious and heartfelt tribute to the irresistible passions that unite us all: man, woman, and salmon.