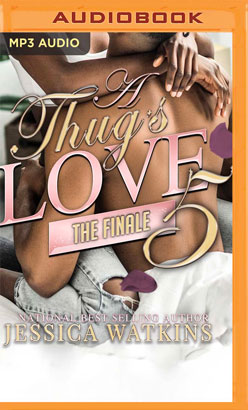 "Sex and bad decisions. That's how Jada had been surviving the multitude of bad luck that had been hurling her way, as of late. The only thing positive in her life, the only thing that made her smile, was her kids and Brooklyn. However, just as her luck had been, both are at risk of being taken from her permanently.

Brittany is still clinging to life, while Brooklyn fights to keep his. In a drive-by meant to avenge the murder of Gustavo, the Carter Crew's connect, Brooklyn was hit, saving Jada, and is now fighting for his life, before he even got the chance to enjoy it with the girl that he had been pining for for years. And while he is clinging to life, a person from his past surfaces to threaten any future that he and Jada may have.

As Jada prays for the lives of her loved ones, Meech fights to forgive King's disloyalty. Meanwhile, Kennedy is struggling with the sudden severe depression that she has succumb to since losing her baby boy.

In this explosive series finale, Jada takes extreme measures to take her life back, while her family and crew fight for their own. Will she finally take the time to fix herself to gain her own happiness, or will she continue to make the bad decisions that not only have been ruining her life, but the lives of her loved ones? Will the Carter crew survive the plunge of their most loyal soldiers? Find out in the finale of the A Thug's Love series!"