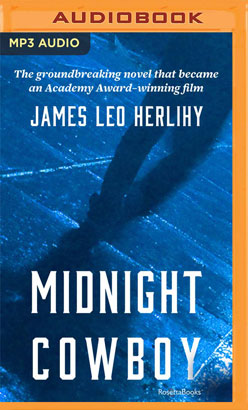 Midnight Cowboy is considered by many to be one of the best American novels published since World War II. The main story centers around Joe Buck, a naive but eager and ambitious young Texan, who decides to leave his dead-end job in search of a grand and glamorous life he believes he will find in New York City. But the city turns out to be a much more difficult place to negotiate than Joe could ever have imagined. He soon finds himself and his dreams compromised. Buck's fall from innocence and his relationship with the crippled street hustler Ratso Rizzo form the novel's emotional nucleus. This unlikely pairing of Ratso and Joe Buck is perhaps one of the most complex portraits of friendship in contemporary literature.

The focus on male friendship follows a strong path cut by Twain's Huck and Jim, Melville's Ishmael and Queequeg, Fitzgerald's Nick Carraway and Jay Gatsby, and Kerouac's Sal Paradise and Dean Moriarity. Midnight Cowboy takes a well-deserved place among a group of distinguished American novels that write - often with unnerving candor - about those who live on the fringe of society.