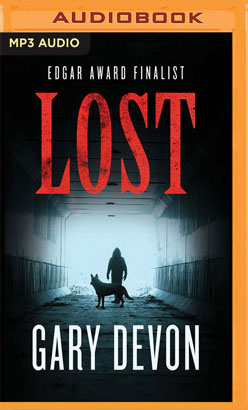 When Sherman Abbott fires a bullet into his brain in front of his younger sister, Mamie, his mother's diligent care and faith in his recovery helps him heal into some semblance of his former self. But a year later, though Sherman can walk and talk, he can relate only to Mamie and the vicious dog known as the Chinaman that lives penned up next door.

Then the Abbott house goes up in flames, and Mamie ends up in the hospital, where Leona Hillenbrandt, a well-meaning, lonely young woman bonds with the injured little girl - and abducts her. As Leona flees across the country, collecting other “lost” children, she must take unusual steps to protect her brood...because someone is stalking them. Aided only by the ferocious Chinaman, Sherman will stop at nothing to reclaim his beloved sister, leaving a trail of blood and carnage in his wake.

An Edgar Award finalist for Best First Novel and hailed as “a minor American classic” by the Philadelphia Daily News, Lost takes listeners into the chilling world of a psychopath and delivers an unforgettable, deeply moving listen that will keep the listener guessing at every turn.