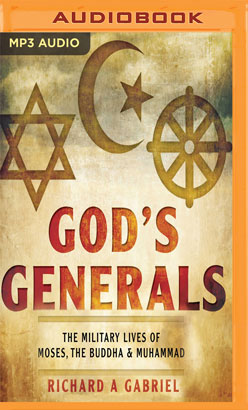 The Military Lives of Moses, Buddha, and Muhammad

By: Richard A. Gabriel

This book examines how the military experience of three religious founders shaped their spiritual legacy.

It is one of the more startling facts of military history that the founders of three of the four "great religions" - Judaism, Buddhism, and Islam - were also accomplished field generals with extensive experience in commanding men in battle. One of these, Muhammad, fought eight battles and was wounded twice, once almost fatally. Another, Siddhartha Gautama (later to become the Buddha), witnessed so much battlefield carnage that he suffered a psychological collapse. Moses had become so much a "god-intoxicated" personality that it is a reasonable suspicion that he, like the Buddha, was murdered.

Indeed, had the experiences of these men in war not been so successful, it is quite possible that their achievements as religious leaders would never have occurred. For all three, war and religion were so closely intertwined in their personalities that it is difficult to discern where the influence of one ended and the other began.

This book attempts to explore the military lives of Moses, the Buddha, and Muhammad, and the role their war experiences played in their religious lives.

Skyhorse Publishing, as well as our Arcade imprint, are proud to publish a broad range of books for listeners interested in history - books about World War II, the Third Reich, Hitler and his henchmen, the JFK assassination, conspiracies, the American Civil War, the American Revolution, gladiators, Vikings, ancient Rome, medieval times, the old West, and much more. While not every title we publish becomes a New York Times best seller or a national best seller, we are committed to books on subjects that are sometimes overlooked and to authors whose work might not otherwise find a home.