Night of Errors, A 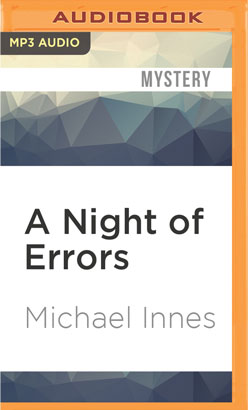 Night of Errors, A

A gruelling night of shrouded motives and confused identities develops when the last of the Dromios is found murdered, with both of his hands burnt off. He was one of triplets, whose brothers had died in a fire 40 years previously. Inspector Appleby wrenches the facts from a melodrama in which the final solution is written in fire.

After the end of World War II, Innes returned to the UK and spent two years at Queen's University, Belfast where in 1949 he wrote the Journeying Boy, a novel notable for the richly comedic use of an Irish setting. He then settled down as a Reader in English Literature at Christ Church, Oxford, from which he retired in 1973.

His most famous character is 'John Appleby', who inspired a penchant for donnish detective fiction that lasts to this day. Innes's other well-known character is 'Honeybath', the painter and rather reluctant detective, who first appeared in 1975 in The Mysterious Commission. The last novel, Appleby and the Ospreys, was published in 1986, some eight years before his death in 1994.