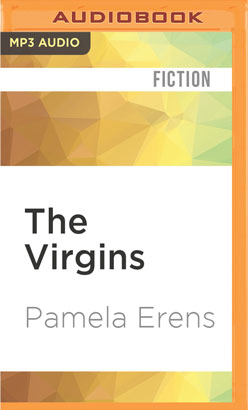 It's 1979, and Aviva Rossner and Seung Jung are notorious at Auburn Academy. They're an unlikely pair at an elite East Coast boarding school (she's Jewish; he's Korean American) and hardly shy when it comes to their sexuality. Aviva is a formerly bookish girl looking for liberation from an unhappy childhood; Seung is an enthusiastic dabbler in drugs and a covert rebel against his demanding immigrant parents. In the minds of their titillated classmates—particularly that of Bruce Bennett-Jones—the couple lives in a realm of pure, indulgent pleasure. But, as is often the case, their fabled relationship is more complicated than it seems: despite their lust and urgency, their virginity remains intact, and as they struggle to understand each other, the relationship spirals into disaster.

The Virgins is the story of Aviva and Seung's descent into confusion and shame, as re-imagined in richly detailed episodes by their classmate Bruce, a once-embittered voyeur turned repentant narrator. With unflinching honesty and breathtaking prose, Pamela Erens brings a fresh voice to the tradition of the great boarding school novel.