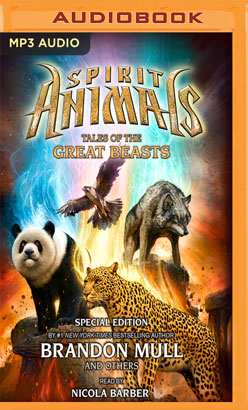 Wild Born
Enter the world of Erdas, where every child who comes of age must discover if they have a spirit animal, a rare bond between human and beast that bestows great powers to both. A dark force has risen from long-forgotten lands, and has begun an onslaught that will ravage the world. Now the fate of Erdas has fallen on the shoulders of four young strangers.

Hunted
In the world of Erdas, only a rare few are able to summon a spirit animal in the way Conor, Abeke, Meilin, and Rollan have. But what if there was another way to create a spirit animal? And what if someone with selfish intentions was offered this gift? The four young heroes face a brutal confrontation against an enemy who will break any rule to defeat them.

Blood Ties
Erdas is a land of balance. The Conquerors are trying to destroy this balance. They're swallowing whole cities in their rush for power—including Meilin's home. Fed up and ready to fight, Meilin has set off into enemy territory with her spirit animal. Her friends aren't far behind.

Fire and Ice
Strange things are happening at the frozen edge of the world. Conor, Abeke, Meilin, and Rollan have crisscrossed Erdas in their quest to stop the ruthless Conquerors. While chasing down a lead in the cold North, the heroes arrive at a quiet village where not everything is as it seems. Rooting the truth out of this deceptively beautiful place won't be easy.

Against the Tide
Conor, Abeke, Meilin, and Rollan have traveled across the world, seeking a set of powerful talismans in order to keep them from enemy hands. Throughout their journey the young heroes have been hounded by pursuers, who always seem to know just where to find them. Now they know why. One of them is a traitor.