Faith Among the Faithless 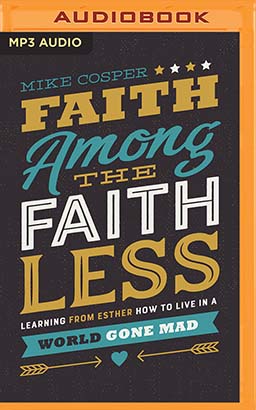 Faith Among the Faithless

Learning from Esther How to Live in a World Gone Mad

Acclaimed writer and pastor Mike Cosper provides Christians with a surprising guide for living in a secular culture by looking at the story of Esther--a tale of evil, awakened faith, and hope of good in a world where God seems absent.

How can Christianity survive in a secular world? How can Christians live without compromise in an increasingly hostile society? And what if we have already been shaped by the culture around us in harmful, soul-destroying ways?

Faith Among the Faithless provides answers by drawing parallels between our world and the story of Esther. Far from the gentle cartoon stories we heard in Sunday school, the book of Esther is a brutal tale of people assimilated into a pluralistic, pagan society who discover its murderous underbelly and turn to God in a moment of courage and crisis. A story of sex, ego, and revenge, the book of Esther reveals a world where God seems absent from everyday life--a world not unlike our own.

Faith Among the Faithless helps readers see themselves in the very human character of Esther, discovering that like her we have an enemy who plots against us. A call to spiritual awakening and to faith and courage in an age of malaise and apathy, Faith Among the Faithless is an invitation to remembrance and presence, knowing that in our dark times God may be hidden, but he is never absent.