Dean Koontz - Collection: What the Night Knows & Your Heart Belongs to Me 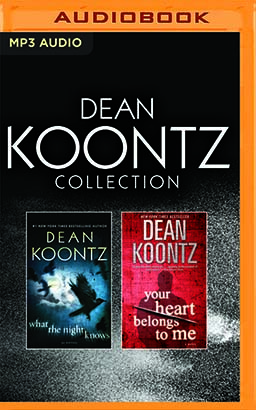 Dean Koontz - Collection: What the Night Knows & Your Heart Belongs to Me

WHAT THE NIGHT KNOWS

In the late summer of a long-ago year, a killer arrived in a small city. His name was Alton Turner Blackwood, and in the space of a few months he brutally murdered four families. His savage spree ended only when he himself was killed by the last survivor of the last family, a fourteen-year-old boy.

Half a continent away and two decades later, someone is murdering families again, re-creating in detail Blackwood’s crimes. Homicide detective John Calvino is certain that his own family—his wife and three children—will be targets in the fourth crime, just as his parents and sisters were victims on that distant night when he was fourteen and killed their slayer.

As a detective, John is a man of reason who deals in cold facts. But an extraordinary experience convinces him that sometimes death is not a one-way journey, that sometimes the dead return.

Here is a ghost story like no other you have read. In the Calvinos, Dean Koontz brings to life a family that might be your own, in a war for their survival against an adversary more malevolent than any he has yet created, with their own home the battleground. Of all his acclaimed novels, none exceeds What the Night Knows in power, in chilling suspense, and in sheer mesmerizing storytelling.

“Dean Koontz...has the power to scare the daylights out of us.” —People

“Koontz seems to know us, our deepest foibles and fears.” —USA Today

“A master at spinning dark tales...Koontz knows how to dial up the terror.” —Associated Press

YOUR HEART BELONGS TO ME

For one man, they are the five most terrifying words of all…your heart belongs to me

One year after the heart transplant that saved his life, thirty-five-year-old Ryan Perry has never felt better. He’s getting back everything he nearly lost forever—his business, his life, and, with luck, his beloved girlfriend. Miracles do happen.

Then the unmarked gifts begin to arrive—a box of candy hearts, a heart-shaped pendant. Most disturbing of all is a graphic heart-surgery video and its chilling message: Your heart belongs to me. Ryan is being stalked by someone who feels entitled to everything he has. She’s the spitting image of the twenty-six-year-old donor of the heart beating steadily in Ryan’s chest. And she’s come to take it back.