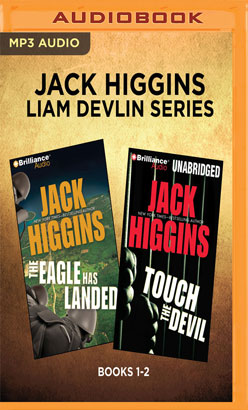 The Eagle Has Landed, Touch the Devil

The Eagle Has Landed
It was to become known as the most daring enemy mission of the entire war: Operation Eagle, SS Reichsfuhrer Heinrich Himmler’s audacious plan to kidnap Winston Churchill on British soil in November 1943. But, despite spectacular secrecy, there was to be no surrender without a fight.… For in a remote corner of Norfolk, an elite unit is gathered together. Ready to do battle for a nation against the most ruthless task force ever assembled.

Touch the Devil
Frank Barry, terrorist of the highest order. His ideology is money and his track record is flawless. When the Russians want review copies of the latest NATO missile system, Barry is the man to deliver them. Martin Brosnan, poet, scholar and killer. Trained in Vietnam then polished in the ranks of the IRA he now languishes in a French prison fortress of Belle Isle. Liam Devlin, Brosnan’s best and oldest friend. Devlin wants Brosnan out of jail and on Barry’s trail, and he’ll use everything in his power to do so.…