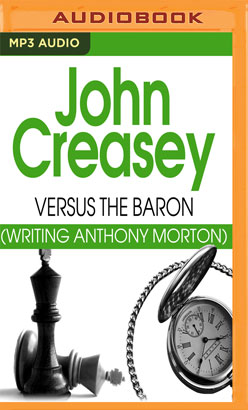 When John Mannering - alias The Baron - is offered a superb set of diamonds, he is faced with a dangerous dilemma. For these are not just any jewels - they are, in fact, 'hot stones', which have been stolen from the Louvre in Paris in one of the most daring robberies for years.

Should he handle the diamonds in the hope that they'll lead him to a murderer? Should he become the Baron again; jewel thief and the greatest of all cracksmen? To stand idly by would to see the murderer go free, and the potential death of a girl. Mannering's ultimate decision makes for a Baron adventure that thrills as much as it sparkles…

Master crime fiction writer John Creasey's near 600 titles have sold more than 80 million copies in over 25 languages under both his own name and over 25 other pseudonyms. His style varied with each identity and led to him being regarded as a literary phenomena. Amongst the many series written were Gideon of Scotland Yard, The Toff, The Baron, Dr. Palfrey and Inspector West, as JJ Marric, Michael Halliday, Patrick Dawlish and others.