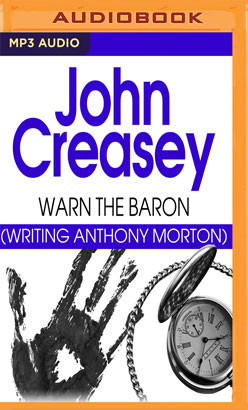 ‘Tell M. danger from Paul K’ read the cryptic warning from a dying man. The ‘M’ in question was John Mannering – alias the Baron – and the warning was not wrong. Faced with two murders and the threat of his own impending death, the Baron steps outside the law to hunt down the ruthless, unknown, killer who has claimed their third victim - Paul K.

Master crime fiction writer John Creasey's near 600 titles have sold more than 80 million copies in over 25 languages under both his own name and multiple other pseudonyms. His style varied with each identity and led to him being regarded as a literary phenomena. Amongst the many series written were ‘Gideon of Scotland Yard', 'The Toff', 'The Baron', 'Dr. Palfrey' and 'Inspector West', as JJ Marric, Michael Halliday, Patrick Dawlish and others.