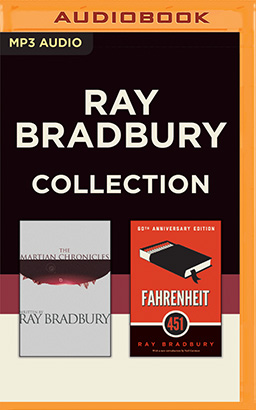 The Martian Chronicles
Ray Bradbury is a storyteller without peer, a poet of the possible, and, indisputably, one of America’s most beloved authors. In a much-celebrated literary career that has spanned six decades, he has produced an astonishing body of work: unforgettable novels, including Fahrenheit 451 and Something Wicked This Way Comes; essays, theatrical works, screenplays and teleplays; The Illustrated Man, Dandelion Wine, The October Country, and numerous other superb short story collections. But of all the dazzling stars in the vast Bradbury universe, none shines more luminous than these masterful chronicles of Earth’s settlement of the fourth world from the sun.

Bradbury’s Mars is a place of hope, dreams, and metaphor—of crystal pillars and fossil seas—where a fine dust settles on the great, empty cities of a silently destroyed civilization. It is here the invaders have come to despoil and commercialize, to grow and to learn—first a trickle, then a torrent, rushing from a world with no future toward a promise of tomorrow. The Earthman conquers Mars…and then is conquered by it, lulled by dangerous lies of comfort and familiarity, and enchanted by the lingering glamour of an ancient, mysterious native race.

Bradbury’s The Martian Chronicles is a classic work of 20th-century literature whose extraordinary power and imagination remain undimmed by time's passage. In connected, chronological stories, a true grandmaster once again enthralls, delights, and challenges us with his vision and his heart—starkly and stunningly exposing in brilliant spacelight our strength, our weakness, our folly, and our poignant humanity on a strange and breathtaking world where humanity does not belong.

Fahrenheit 451
Sixty years after its original publication, Ray Bradbury’s internationally acclaimed novel Fahrenheit 451 stands as a classic of world literature set in a bleak, dystopian future. Today its message has grown more relevant than ever before.

Guy Montag is a fireman. His job is to destroy the most illegal of commodities, the printed book, along with the houses in which they are hidden. Montag never questions the destruction and ruin his actions produce, returning each day to his bland life and wife, Mildred, who spends all day with her television “family.” But when he meets an eccentric young neighbor, Clarisse, who introduces him to a past where people didn’t live in fear and to a present where one sees the world through the ideas in books instead of the mindless chatter of television, Montag begins to question everything he has ever known.