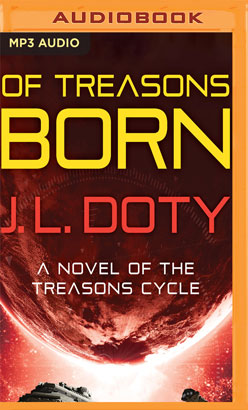 A Novel of the Treasons Cycle

A gripping military science fiction adventure starring the hero of A Choice of Treasons.

As a lifer in the Imperial Navy fighting in a war that has lasted for generations, York Ballin's only hope for an honorable discharge is the grave. But what events led up to his reluctant enlistment? What spawned York's almost fanatic loyalty to his friends - and his doubts regarding the imperial uniform he once wore with such pride?

York rarely recalls his childhood, which began with a mystery and ended at age 11 when he was given a harsh choice: Join the navy or face certain death on a prison asteroid. The navy has its own code of justice, but a youngster with curiosity and grit is able to rise in the ranks...if he's given a fair shot.

A few rigorous years later, as a newly commissioned ensign, York is assigned to the hunter-killer ship The Fourth Horseman. But when an unexpected foe kills his superior officer and leaves the crew stranded in enemy territory, the young ensign must do whatever he can to save the ship - even if it means he'll be court-martialed for treason.

Of Treasons Born is a novel of the Treasons Cycle; the series was written so that it can be listened to in any order.