Choice of Treasons, A 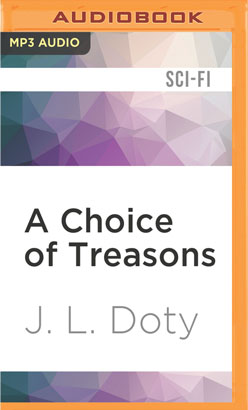 Choice of Treasons, A

As a lifer in the Imperial Navy, fighting in a war that has lasted generations, Lieutenant York Ballin's only hope for an honorable discharge is the grave. Neither the Empire nor the Directorate seems to care that millions have died or that millions more are doomed as hostilities continue. Ballin's only option is to hunker down, keep his crewmen and women in top condition, and try not to get them all killed. But matters take a turn for the worse when he's forced to hijack the cruiser Cinesstar in order to evacuate the empress, her daughter, and the imperial embassy just before the planet Dumark falls to the enemy.

Now, deep behind enemy lines, aboard a ship without a trained crew and commanded by an incompetent nobleman, it becomes clear to Ballin that the empress has a dangerous agenda - so dangerous it threatens the power structures of both the Empire and the Directorate. Now even their comrades in the Empire are hell-bent on turning Cinesstar into a cloud of radioactive vapor. It falls to Lieutenant Ballin to save them all, but every option leads to a quandary - and he finds himself faced with a choice of treasons.

A Choice of Treasons is part of J. L. Doty's Treasons Cycle, which also includes Of Treasons Born, the story of York Ballin's reluctant enlistment in the Imperial Navy, his loyalty to his friends, and his doubts regarding the imperial uniform he once wore with great pride.