John Saul - Collection: Faces of Fear, In the Dark Of The Night, The Devil's Labyrinth 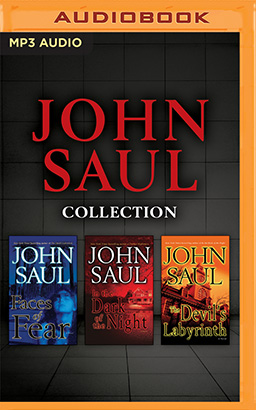 John Saul - Collection: Faces of Fear, In the Dark Of The Night, The Devil's Labyrinth

Fifteen-year-old Alison Shaw may not be beautiful, but she doesn’t really care: She’d much rather read a good book than primp in front of a mirror. But Alison’s gorgeous mother, Risa, knows that beauty can be a key to success and wishes only the best for her daughter–a wish that may come true after Risa marries widowed plastic surgeon Conrad Dunn. Conrad claims that he can turn Alison into a vision of loveliness, so the teenager reluctantly agrees to undergo the first procedure. Then Alison discovers a picture of Conrad’s first wife and notes, to her horror, a resemblance between the image in the photo and the work her stepfather is doing on her. Though, Risa refuses to acknowledge the strange similarities, Alison digs further into her stepfather’s murky past, uncovers dark secrets and even darker motives–and realizes that her worst fears are fast becoming reality.

IN THE DARK OF THE NIGHT

It has waited seven years for someone to come back to the rambling lakeside house called Pinecrest, which has stood empty since its last owner went missing. For upscale Chicago couple Dan and Merrill Brewster, the old midwestern manse is an ideal retreat, and for their kids, Eric and Marci, it’s the perfect place to spend a lazy summer exploring. Which is how Eric and his teenage friends discover the curious cache of discarded objects stowed in a hidden room of Pinecrest’s carriage house. The bladeless hacksaws, shadeless lamps, tables with missing legs, headless axe handle, and other unremarkable items add up to a pile of junk. Yet someone took the trouble to inventory each worthless relic in a cryptic ledger. The more the boys devote themselves to restoring the forgotten possessions and piecing together the puzzle behind them, the more their fascination deepens into obsession. When a horrifying discovery surfaces, so does the chilling truth about the terrifying events that rocked the town seven years before, the mysterious disappearance of Pinecrest’s last resident, and a twisted legacy with a malevolent life of its own…and a bottomless hunger for new victims.

After his father’s untimely death sends fifteen-year-old Ryan McIntyre into an emotional tailspin, his mother enrolls him in St. Isaac’s Catholic boarding school, hoping the venerable institution with a reputation for transforming wayward teens can work its magic on her son. But troubles are not unknown even at St. Isaac, where Ryan arrives to find the school awash in news of one student’s violent death, another’s mysterious disappearance, and growing incidents of disturbing behavior within the hallowed halls.

Things begin to change when Father Sebastian joins the faculty. Armed with unprecedented knowledge and uncanny skills acquired through years of secret study, the young priest has been dispatched on an extraordinary and controversial mission: to prove the power of one of the Church’s most arcane sacred rituals, exorcism. Willing or not, St. Isaac’s most troubled students will be pawns in Father Sebastian’s one-man war against evil?a war so surprisingly effective that the pope himself takes notice of the seemingly miraculous events unfolding an ocean away.

But Ryan, drawn ever more deeply into Father Sebastian’s ministrations, sees?and knows?otherwise. As he witnesses with mounting dread the transformations of his fellow pupils, his certainty grows that forces of darkness, not divinity, are at work. Evil is not being cast out…something else is being called forth. Something that hasn’t stirred since the Inquisition’s reign of terror. Something nurtured through the ages to do its vengeful masters’ unholy bidding. Something whose hour has finally come to bring hell unto earth.