Third Claw of God, The 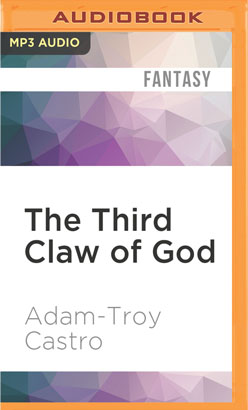 Third Claw of God, The

Andrea Cort became a "war criminal" at the age of eight when an unexplained darkness invaded her soul. Now, decades later, the Devil is calling her. Employed by the Diplomatic Corps but secretly aiding the AI masters of the universe, Counselor Andrea Cort despises the powerful Bettelhines—unrepentant death merchants who have prospered from the annihilation of civilizations. Now curiosity compels her to answer a cryptic summons to their home world, where the only law is Bettelhine law. But a murder attempt greets her arrival at Xana's orbital entry port—and far graver peril awaits aboard the elevator transport meant to carry Andrea to the planet's surface.

Trapped miles above Xana—surrounded by suspicious Bettelhines, their slavishly loyal retainers—and a corpse liquefied by a 15,000-year-old weapon—Andrea must unmask an assassin or die an equally hideous death. But the true reason for her summons—and sordid secrets weaving through her own dark past—threaten to destroy Andrea Cort more completely than the Claw of God.