Herodotus and Religion in the Persian Wars 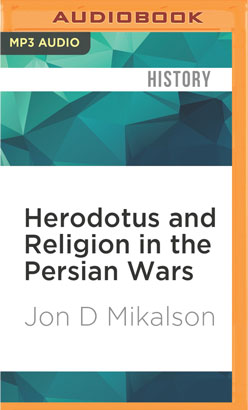 Herodotus and Religion in the Persian Wars

The two great Persian invasions of Greece, in 490 and 480-79 B.C., both repulsed by the Greeks, provide our best opportunity for understanding the interplay of religion and history in ancient Greece on a large scale. Using the Histories of Herodotus as well as other historical and archaeological sources, Jon Mikalson shows how the Greeks practiced their religion at this pivotal moment in their history.

In the period of the invasions and the years immediately afterward, the Greeks—internationally, state by state, and sometimes individually—turned to their deities, using religious practices to influence, understand, and commemorate events that were threatening their very existence. Greeks prayed and sacrificed; made and fulfilled vows to the gods; consulted oracles; interpreted omens and dreams; created cults, sanctuaries, and festivals; and offered dozens of dedications to their gods and heroes—all in relation to known historical events. By portraying the human situations and historical circumstances in which Greeks practiced their religion, Mikalson advances our knowledge of the role of religion in fifth-century Greece and reveals a religious dimension of the Persian Wars that has been heretofore overlooked.