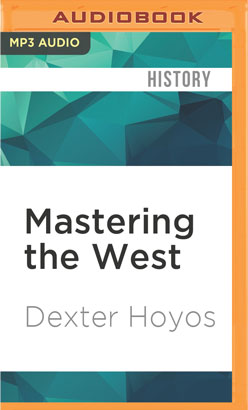 Rome and Carthage at War

To say the Punic Wars (264-146 BC) were a turning point in world history is a vast understatement. This bloody and protracted conflict pitted two flourishing Mediterranean powers against one another, leaving one an unrivalled giant and the other a literal pile of ash. To later observers, a collision between these civilizations seemed inevitable and yet to the Romans and Carthaginians at the time hostilities first erupted seemingly out of nowhere, with what were expected to be inconsequential results.

Mastering the West offers a thoroughly engrossing narrative of this century of battle in the western Mediterranean, while treating a full range of themes: the antagonists' military, naval, economic, and demographic resources; the political structures of both republics; and the postwar impact of the conflicts on the participants and victims. The narrative also investigates questions of leadership and the contributions and mistakes of leaders like Hannibal, Fabius the Delayer, Scipio Africanus, Masinissa, and Scipio Aemilianus.

Dexter Hoyos, a leading expert of the period, treats the two great powers evenly, without neglecting the important roles played by Syracuse, Macedon, and especially Numidia. Written with verve in a clear, accessible style, Mastering the West will be the most reliable and engaging narrative of this pivotal era in ancient history.