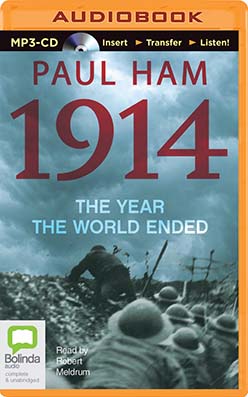 The Year the World Ended

Few years can justly be said to have transformed the earth: 1914 did.

In July that year, Germany, Austria-Hungary, Russia, Britain and France were poised to plunge the world into a war that would kill or wound 37 million people, tear down the fabric of society, uproot ancient political systems and set the course for the bloodiest century in human history. In the longer run, the events of 1914 set the world on the path toward the Russian Revolution, the Treaty of Versailles, the rise of Nazism and the Cold War.

In 1914: The Year the World Ended, award-winning historian Paul Ham tells the story of the outbreak of the Great War from German, British, French, Austria-Hungarian, Russian and Serbian perspectives. Along the way, he debunks several stubborn myths. European leaders, for example, did not stumble or "sleepwalk" into war, as many suppose. They fully understood that a small conflict in the Balkans—the tinderbox at the heart of the continent—could spark a European war. They well knew what their weapons could do. Yet they carried on. They accepted—and, in some cases, even seemed to relish—what they saw as an inevitable clash of arms. They planned and mapped every station on the path to oblivion. These pied pipers of the apocalypse chose war in the full knowledge that millions would follow, and die, on their orders.

1914: The Year the World Ended seeks to answer the most vexing question of the 20th century: Why did European governments decide to condemn the best part of a generation of young men to the trenches and four years of slaughter, during which 8.5 million would die?