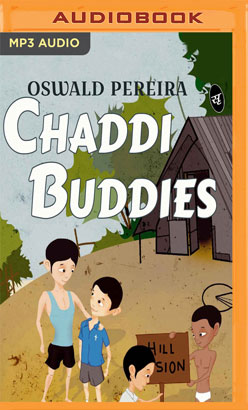 Hill Mansion wasn't really a mansion; it was just a ramshackle hut on a small hill. But for Robert Pereira, it was better than any place he had seen in his village, Golvada. His chaddi buddies Anand and Baloo lived there with their elder brother Dattya - his hero and the village cricket team captain. Robert had named their hut Hill Mansion, moved by love for his buddies. It didn't matter to him that they were the sons of a domestic help.

Robert loved Hill Mansion more than his own modern house because the poor but strong residents of Hill Mansion had given him the courage to live and fight, bestowing on him the pet name Samson. On the other hand, his siblings and village bullies made fun of his clumsiness and weakness and nicknamed him Pondya - an indolent, feeble fellow.

Will Robert be able to fight the village bullies and erase the shameful Pondya tag? Will his love for his buddies stand the test of time and social barriers as he grows up?

Chaddi Buddies is a tender story of friendship, love and brotherhood, loosely based on the author's childhood, which will kindle sweet memories as you listen.