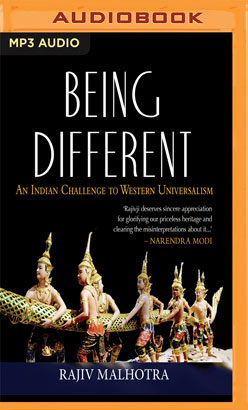 An Different Challenge to Western Universalism

India is more than a nation state. It is also a unique civilization with philosophies and cosmologies that are markedly distinct from the dominant culture of our times - the West.

India's spiritual traditions spring from dharma, which has no exact equivalent in Western frameworks. Unfortunately, in the rush to celebrate the growing popularity of India on the world stage, its civilizational matrix is being co-opted into Western universalism, thereby diluting its distinctiveness and potential.

In Being Different: An Indian Challenge to Western Universalism, thinker and philosopher Rajiv Malhotra addresses the challenge of a direct and honest engagement on differences by reversing the gaze, repositioning India from being the observed to the observer and looking at the West from the dharmic point of view. In doing so, he challenges many hitherto unexamined beliefs that both sides hold about themselves and each other. He highlights that while unique historical revelations are the basis for Western religions, dharma emphasizes self-realization in the body here and now. He also points out the integral unity that underpins dharma's metaphysics and contrasts this with Western thought and history as a synthetic unity.

Erudite and engaging, Being Different critiques fashionable reductive translations and analyses the West's anxiety over difference and fixation for order which contrast the creative role of chaos in dharma. It concludes with a rebuttal of Western claims of universalism while recommending a multicultural worldview.