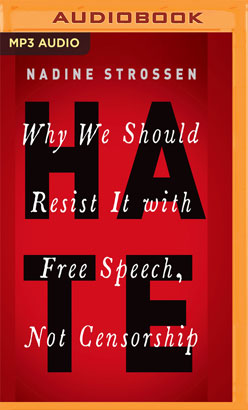 Why We Should Resist It with Free Speech, Not Censorship

HATE dispels misunderstandings plaguing our perennial debates about "hate speech vs. free speech", showing that the First Amendment approach promotes free speech and democracy, equality, and societal harmony. We hear too many incorrect assertions that "hate speech" - which has no generally accepted definition - is either absolutely unprotected or absolutely protected from censorship. Rather, US law allows government to punish hateful or discriminatory speech in specific contexts when it directly causes imminent serious harm. Yet government may not punish such speech solely because its message is disfavored, disturbing, or vaguely feared to possibly contribute to some future harm. When US officials formerly wielded such broad censorship power, they suppressed dissident speech, including equal rights advocacy. Likewise, current politicians have attacked Black Lives Matter protests as "hate speech".

"Hate speech" censorship proponents stress the potential harms such speech might further: discrimination, violence, and psychic injuries. However, there has been little analysis of whether censorship effectively counters the feared injuries. Citing evidence from many countries, this book shows that "hate speech" laws are at best ineffective and at worst counterproductive. Their inevitably vague terms invest enforcing officials with broad discretion, and predictably, regular targets are minority views and speakers. Therefore, prominent social justice advocates in the United States and beyond maintain that the best way to resist hate and promote equality is not censorship but, rather, vigorous "counterspeech" and activism.