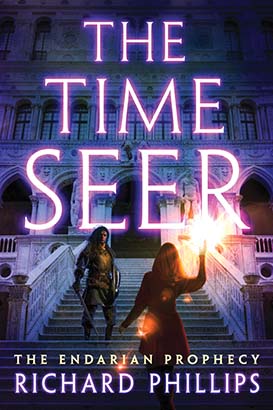 Fulfilling a prophecy to save the world can drive a young woman mad as the enthralling epic fantasy series continues.

Carol Rafel knows the lengths to which the sorcerer Kragan will go to impede the fulfillment of her prophecy: destroy the wielder of necrotic magic before she destroys him. Never far from Kragan’s evil grasp, she is struck down by his wicked spell.

Carol’s assassin husband, Arn, has no choice but to cast aside his precious weapon to embrace a more powerful one: the clairvoyance he shares with Carol. With time-sights linked, they must now rely on the dreamscapes of their minds to track Kragan into the shadows as he nears his own invaluable weapon: the legendary shattered trident, which will ensure him godlike powers. But Carol and Arn’s visions come at a cost. Pursuit into such abominable darkness is leading to madness.

As Kragan’s armies amass for a raging war between good and evil, Carol fears that the ancient prophecy she’s been chosen to bear out may be impossible to survive.