Never Trust a Leader Without a Limp 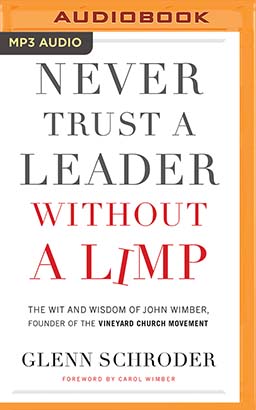 Never Trust a Leader Without a Limp

The Wit and Wisdom of John Wimber, Founder of the Vineyard Church Movement

John Wimber, founder of the Vineyard movement had a unique ability to capture truth in pithy little phrases. “The meat’s in the street,” “Doin’ the Stuff,” and “Come as you are” are just of few of those phrases that distinguished the Vineyard movement. Glenn Schroder was at the Anaheim Vineyard throughout John’s 20-year tenure as pastor. Glenn traveled with John, served under him, and heard him speak more than 2,000 times. He captures and preserves the story and identity of the Vineyard movement by expounding on those phrases. John passed away in 1997, and today there is an entire generation of young leaders who never met John or experienced his ministry firsthand. The Vineyard has grown to an international community of churches numbering upwards of 2,400 in more than 60 countries. Never Trust a Leader Without a Limp is a restatement of the foundational tenets that launched the movement.