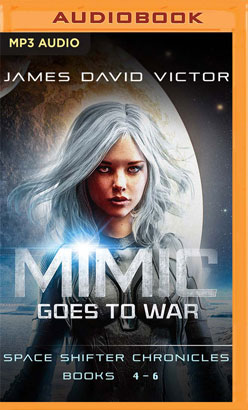 An aspiring space engineer, a shape-shifting alien, and a friendship that might save an entire race.

Higgens discovered a new shapeshifting alien race. With the help of unexpected allies, they saved the new race of shapeshifters. While Higgens and Mimic attempt to live in peace, the galaxy conspires to enslave this new race. If they are to have any hope of living in peace, they will have to fight, and win, a war against the forces that conspire to put an end to their newfound freedom.

The Mimic Goes to War Omnibus contains the books four through six in the Space Shifter Chronicles. If you like fast-paced space adventures with engaging, and quirky, characters, you will love Higgens, Mimic, and their adventures in space.