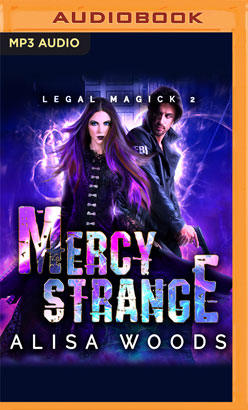 Some Talents are too dangerous to keep.

There's a madman who calls himself a scientist...and I have to stop him. Never mind that his med-magick drugs might be the key to my own research. Never mind that his red-and-yellow pill tempts me with the promise of turning off a Talent I'd give anything to erase. The madman developed his med-magick with an illegal drug trial, performing experiments on people like my father - and using my own family's company to do it! The madman will pay for that, even if I have to hunt him down myself. I'll train the FBI's insanely sexy field agent to go undercover after the killer, but when this is done, I'll be taking that pill...and finally destroying the part of me that's too dangerous to keep.

This is just another job. I keep telling myself that, but Mercy's emotional soundscape sings to me like no other. There's so much she's hiding, just under the surface. She doesn't know what I am - few people do - and it needs to stay that way. Because I'm not just following leads to find our serial-killer-by-drugs - I'm investigating her. And if she's dirty in this, I'll have to march her out in handcuffs. Or get yanked from the case. Or get sent back to the military work I barely escaped. Mercy's dangerously tempting, but I can't go back there again. Yet I can't seem to tear myself away from the music of her oh-so-brilliant mind....

Someone's developed a drug that can erase magickal Talents...and they need to be stopped before they kill anyone else. Swift's Talent is secret, and Mercy's secret is her Talent. But they have to work together to find the mad scientist with the killer drugs...before he unleashes them on the streets of Chicago.