It's What You Think (When You Think About Cheating) 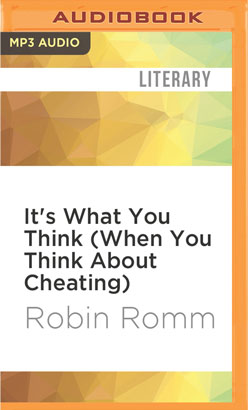 It's What You Think (When You Think About Cheating)

When we meet Shalem, a young woman in her late 30s, she is enduring small talk at a cocktail party hosted by one of her husband's colleagues. One talks about her breast milk and her twins; another frets about the matronly ass of his girlfriend. Shalem has arrived at the age of no longer young but not old and balancing the in-between. What she wears isn't cool. What she thinks isn't cool. She loves her husband but wonders where the passion has gone. When she bumps into the hostess of the party, a writer who has been researching a new play, the playwright reports that experts say any couple still having sex after five years of marriage does so only because of an active fantasy life. At first, that notion is perplexing to Shalem, but the more she thinks about it, the more game she is. When she embraces the idea and fantasizes about a work colleague, it gets things going. But now Shalem has a new plight - navigating between her fantasy world and reality.

Robin Romm's short story collection The Mother Garden was a finalist for the PEN USA Prize. Her memoir The Mercy Papers was a New York Times Notable Book of the Year, a New Times Editor's Choice, a San Francisco Chronicle Best Book of the Year, and an Entertainment Weekly Top 10 Nonfiction Book of the Year. Romm's work has appeared in the New York Times, the Atlantic, the UK Observer, O Magazine, the Sun, Tin House, One Story, Threepenny Review, the Antioch Review, Shenandoah, Gulf Coast, and many other publications. Romm has spoken widely about writing and grief - at Columbia Medical School, the Jewish Theological Seminary, and Red Bird Grief Center, as well as in private workshops. She's a frequent contributor to the New York Times Book Review and teaches at the low-residency MFA program for Writers at Warren Wilson.