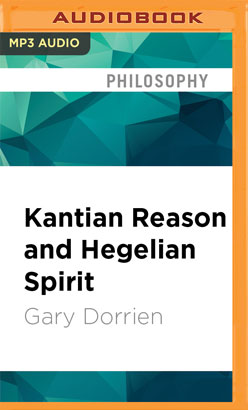 The Idealistic Logic of Modern Theology

What role, if any, did Immanuel Kant and post-Kantian idealists such as Hegel play in shaping modern theology?

In Kantian Reason and Hegelian Spirit , noted theologian Gary Dorrien argues that Kantian and post-Kantian idealism were instrumental in the foundation and development of modern Christian theology. In this thought-provoking new work, Dorrien contends that while pre-Kantian rationalism offered a critique of religion's authority, it held no theory about the creative powers of mind, nor about the spiritual ground and unifying reality of freedom. As Kant provided both of these, he can be considered the originator of modern religious thought. Dorrien reveals how the post-Kantian idealists also played an important role, by fashioning other forms of liberal religious thought through alternative solutions to the Kantian problems of subjectivity and dualism.

Dorrien carefully dissects Kant's three critiques of reason and his moral conception of religion, and analyses the alternatives to Kant offered by Schleiermacher, Schelling, Hegel, and others. Dorrien goes on to provide a substantial account of the development of liberal theology in Britain , and the thought of Paul Tillich and Karl Barth, showing how these, as well as the dominant traditions of German liberal theology, and even the powerful critiques of liberal religious idealism proffered by Kierkegaard and the left-Hegelian school, were rooted in Kantian or post-Kantian idealism. Presenting these notoriously difficult arguments in a wonderfully lucid and accessible manner, Dorrien solidifies his reputation as a pre-eminent social ethicist. Kantian Reason and Hegelian Spirit offers deeply illuminating insights into the impact of 19 th-century philosophical idealism on contemporary religious thought.

Gary Dorrien is the Reinhold Niebuhr Professor of Social Ethics at Union Theological Seminary and Professor of Religion at Columbia University. He is the author of more than a dozen books, including the highly–acclaimed trilogy The Making of Liberal Theology (2001, 2003, 2006), and Social Ethics in the Making: Interpreting an American Tradition (Wiley–Blackwell, 2008, 2010).