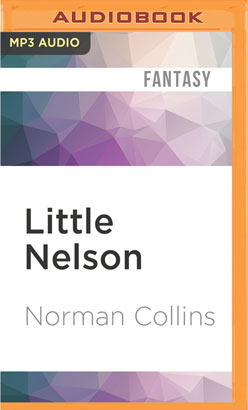 The authentic account of the great Gnome Revolt, Little Nelson is the intimate and moving story of the tender relationship between a runaway garden gnome and a Vicar's spinster sister.

The action takes place during the memorable Gnome uprising when the whole country was, for 12 months, in the grip of forces of garden Gnomes numbered in the tens of thousands. Little Nelson himself emerges as a national figure. Named after the distinguished Admiral, Little Nelson reveals all the characteristics of his predecessor - fiery devotion, dedication, and eventual self-sacrifice.

The character of the Vicar's sister also deserves her niche in the gallery of feminine devotion and of bravery unhesitatingly pursued despite the danger of arrest and imprisonment. Not that the Reverend Cyril Woods-Denton should be forgotten. A conforming Anglican of high character, he was driven against his conscience to lend himself to his sister's hazardous plot for the concealment of the refugee Gnome in hiding from the authorities. The exploits of Little Nelson and his Gnome confederates, however, extend far beyond the confines of the suburban Vicarage.

For the first time, the author provides fully authenticated records of major Gnome incidents up and down the country, together with full descriptions of the notable outbursts that occurred in the Royal Albert Hall, the Royal Opera House, and, ultimately, on the great lawn of Kenwood House. Little Nelson is already recognized as a classic in the field of Gnome literature.