Little House in the Hollywood Hills 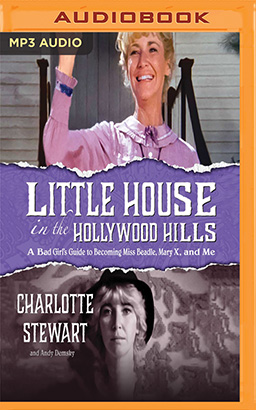 Little House in the Hollywood Hills

A Bad Girl’s Guide to Becoming Miss Beadle, Mary X, and Me

Charlotte Stewart is known by millions of fans worldwide for her role as the beloved schoolteacher, Miss Beadle, on the iconic TV show, Little House on the Prairie, currently broadcast in syndication in more than 100 countries around the world. Here for the first time an adult cast member writes about the experience of making the show - the challenges, the joys, and the sometimes-turbulent behind-the-scenes relationships.

Charlotte, with Andy Demsky, reveals 50 years in film and television offering a backstage pass to Hollywood's cocaine-fueled 1960s, '70s and '80s, including Charlotte's celebrated work as Mary X in David Lynch's cult classic film, Eraserhead, as well as her later work as Betty Briggs in the highly-rated television series, Twin Peaks. Charlotte recounts stories of working with leading men from Jimmy Stewart and Elvis Presley to Kevin Bacon and Kyle MacLachlan. She details off-stage friendships with Neil Young and Joni Mitchell, as well as relationships and flings with some of TV, film, and music's biggest names, including Jon Voight, Richard Dreyfuss, Tim Considine, Bill Murray, Jim Morrison, and more.

Ultimately, Charlotte's story is that of a survivor. Six years after her career-making role on Little House on the Prairie, she lost everything. Yet through the darkest periods of her life - divorce, drug-use, cancer, financial ruin, the death of a spouse, and alcoholism - she never lost her humanity or sense of humor.

Charlotte's story is far from over. She is set to reprise her role of Betty Briggs in the new Twin Peaks series to be seen on Showtime in 2017. Throughout the year, she is a featured celebrity in fan events and festivals for Little House on the Prairie and Twin Peaks both in the US and abroad.

Co-author Andy Demsky is a writer and journalist, whose work has been published in the San Francisco Chronicle, Los Angeles Times magazine and Better Homes & Gardens, and he co-wrote Doug Shafer's critically acclaimed memoir, A Vineyard in Napa.